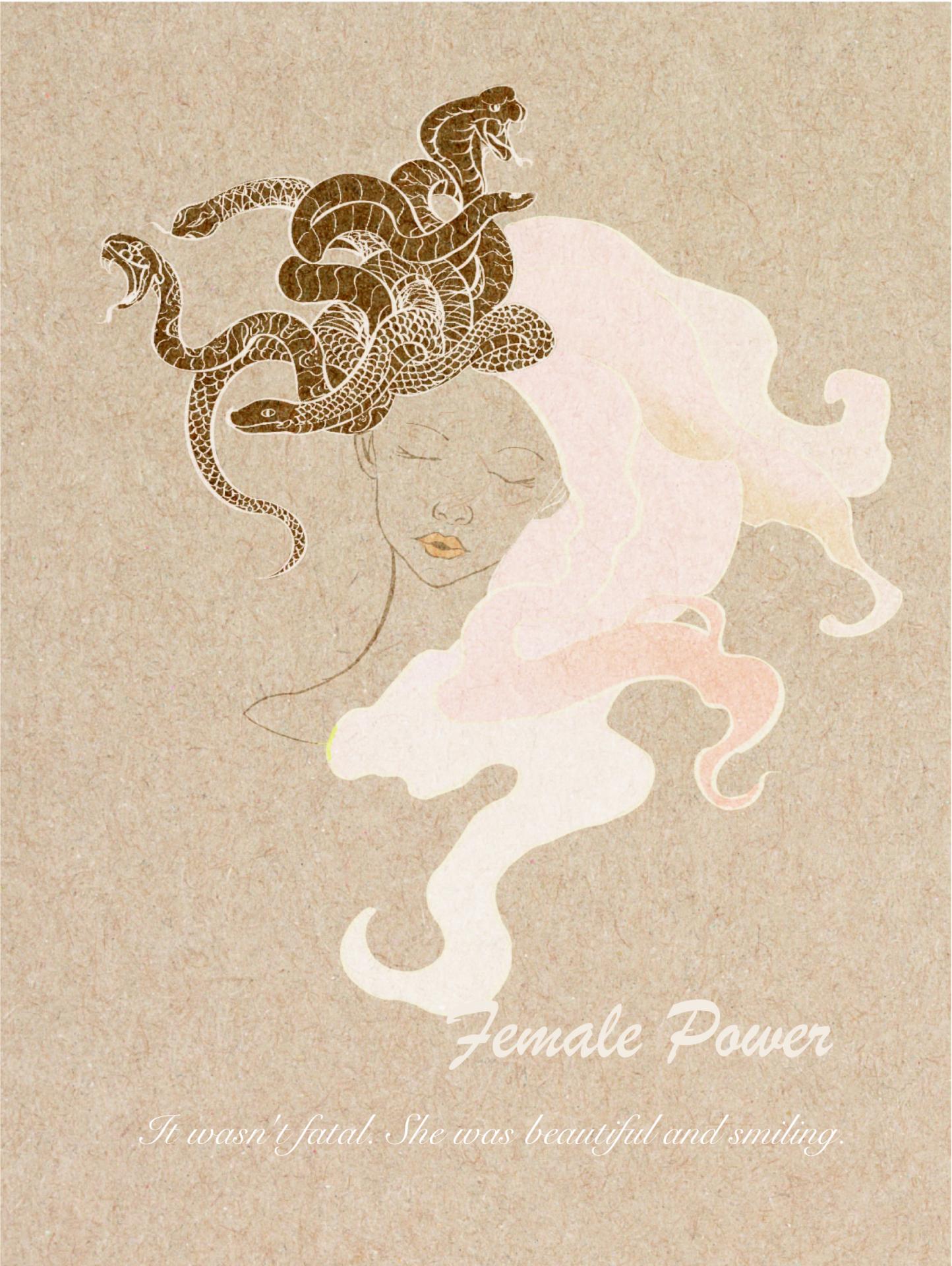 Athena put a curse on Medusa, turning her into a snake-haired demoness who would turn anyone who looked at her into stone. After the rape and humiliation Medusa experienced, and after being abandoned and even cursed by the goddess she once admired so much, the innocence and liveliness in her heart was gone, and now hatred filled her mind, turning her heart into a barren, weedy place where no more flowers of goodwill could bloom.

But it was Medusa's beauty that caught the attention of Poseidon, the god of the sea. So radiant was Medusa that Poseidon's lust burned at the mere sight of her, and so he took the form of a stallion and seduced Medusa. Humiliated, Medusa hid in Athena's temple, seeking refuge from her. But Poseidon, the god of the sea, was so powerful that he was one of the twelve gods of Olympus and the brother of Zeus, the king of the gods. It is said that when Poseidon swung his trident in anger, it caused a tsunami that shook the earth and mountains, and none of the gods dared to offend him easily. Athena did not give Medusa refuge, but was outraged that Medusa was already unclean, and was even more outraged that such an affair had taken place in her temple.

Originally an innocent, lively and beautiful woman, Medusa had two other sisters, Scylla and Urieli. Of these three sisters, Medusa was the only corporeal mortal body. Athena, as we all know, was the goddess of wisdom, war and weaving in ancient Greek mythology, representing virgin chastity and light, she was bright and brilliant, radiant and graceful. Out of her infinite admiration and desire for Athena, Medusa became a priestess in the temple of Athena. According to local custom, a priestess had to remain chaste throughout her life

When Perseus learned of this, he came up with a way to get closer to Medusa. He turned his back on Medusa without looking at her, and instead used a shiny shield that could be imprinted with a human image as a mirror, found Medusa and with the help of Athena and Hermes cut off Medusa's head. After cutting off Medusa's head, out of Medusa's torso leapt her offspring, the winged Pegasus Perseus and the giant Crassaur. Riding Pegasus, the winged Pegasus, Perseus took Medusa's head across the Libyan desert, being blown from side to side by the gale on the way, and the blood from Medusa's head dripped into the Libyan desert, turning it into a viper that roamed the desert.