Loosely inspired by the fig tree passage in Sylvia Plath’s The Bell Jar, Dreams of the Anthropocene Is a piece about the anxiety and existential feelings that come with living in an era of climate collapse. This piece aims to explore my own personal feelings on the matter as well as larger shared fears. All the materials used in this quilt are reused, either donated by members of the community or found in skips or on walks.

You can find more of my work and adventures on my Instagram https://www.instagram.com/odditycraft/ 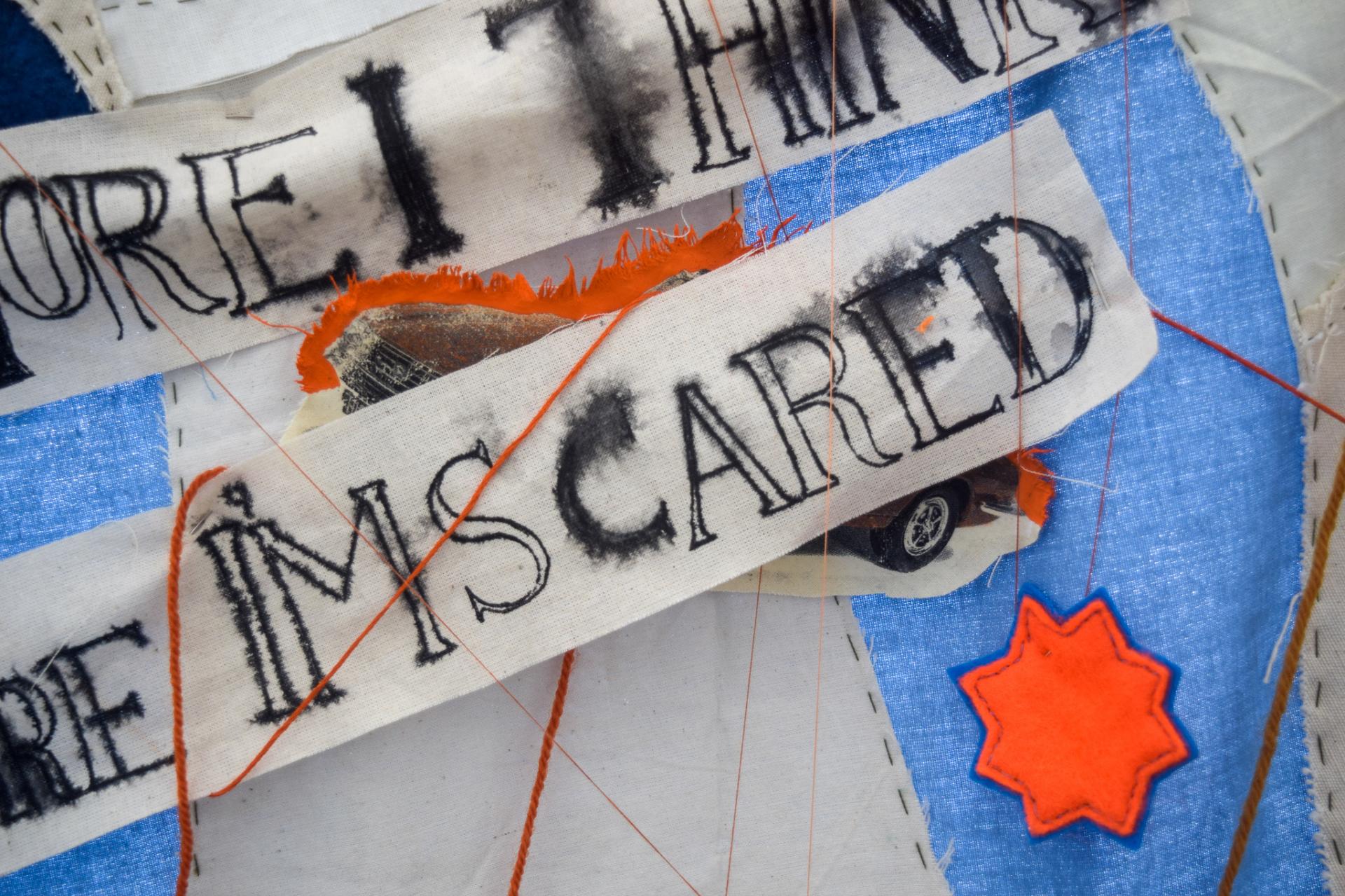 A detail from Dreams of the Anthropocene featuring the words "IM SCARED" The rest of the text is cropped out of the image but reads " THE MORE I KNOW, THE MORE I CARE, THE MORE I THINK, THE MORE IM SCARED." 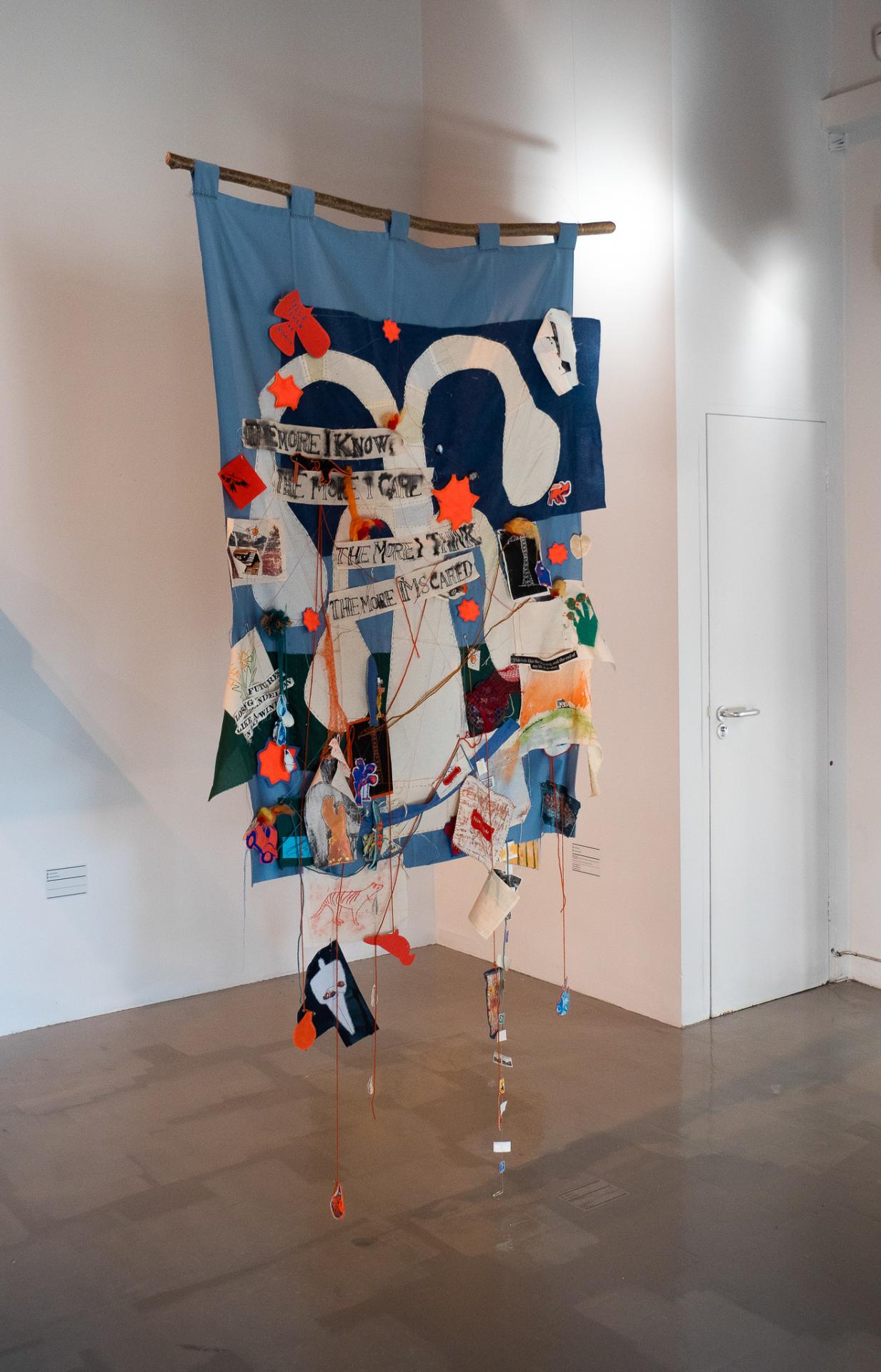 A zoomed out view of the banner, taken in the James Hockey gallery at UCA Farnham. The banner is a blue piece of a fabric with a white tree embroidered onto it. It is covered in a variety of imagery pinned onto it. The whole thing is hanging on a long stick. 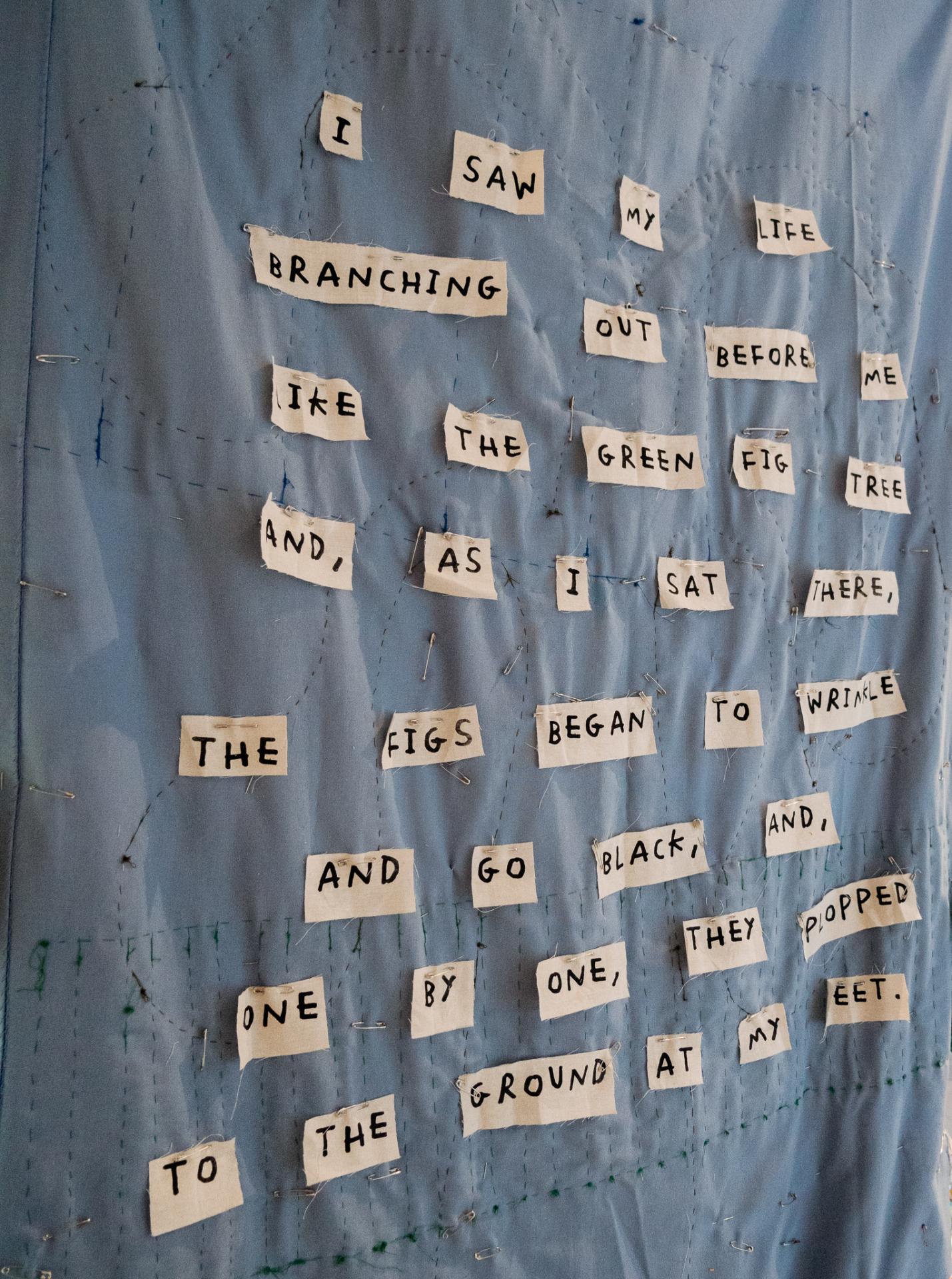 The back of the banner featuring an abridged version of the fig tree passage from The Bell Jar by Sylvia Plath. “I saw my life branching out before me like the green fig tree and, as I sat there, the figs began to wrinkle and go black, and, one by one, they plopped to the ground at my feet.” 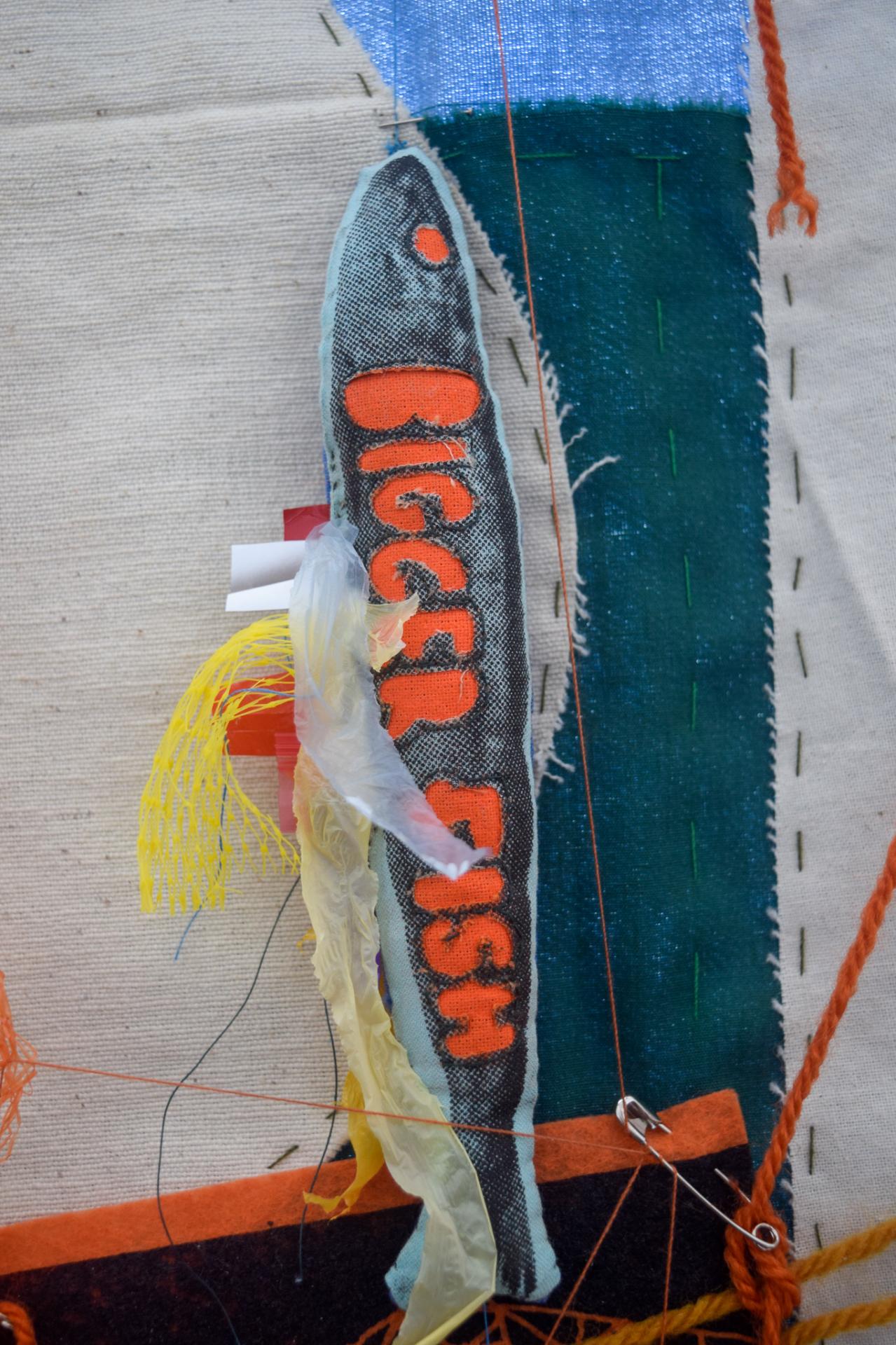 A detail from the piece featuring a blue fabric fish with the words "Bigger fish" reverse appliqued onto it. The fish has various bits of coloured plastic poking out of its belly. Not featured in the image is another similar fish below this one with the words "To fry" on it. 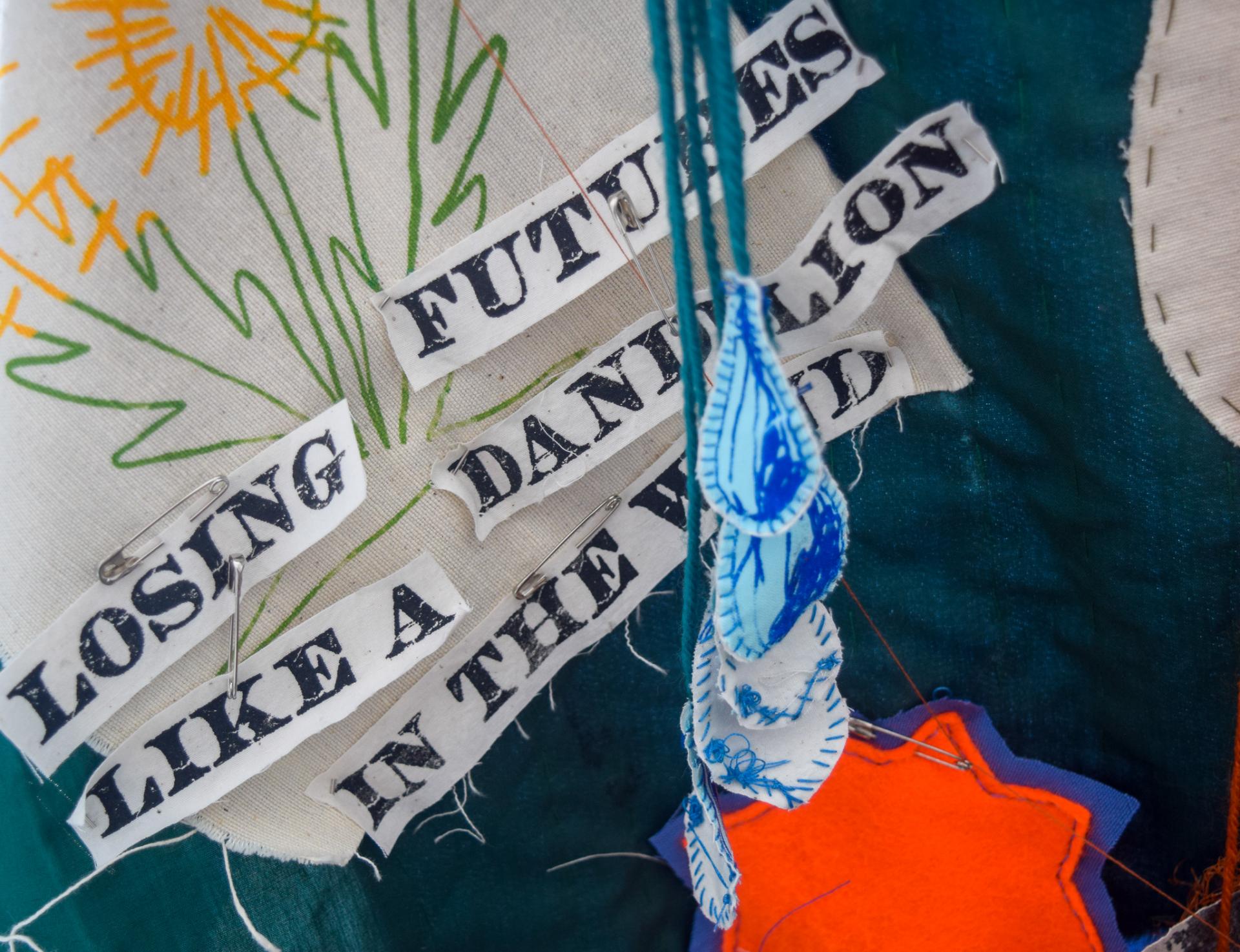 A detail from the piece featuring a screenprinted drawing of a dandelion with the words "losing futures like a dandelion in the wind" pinned below it on various strips of fabric. The words are slightly obscured by blue fabric figs on strings. 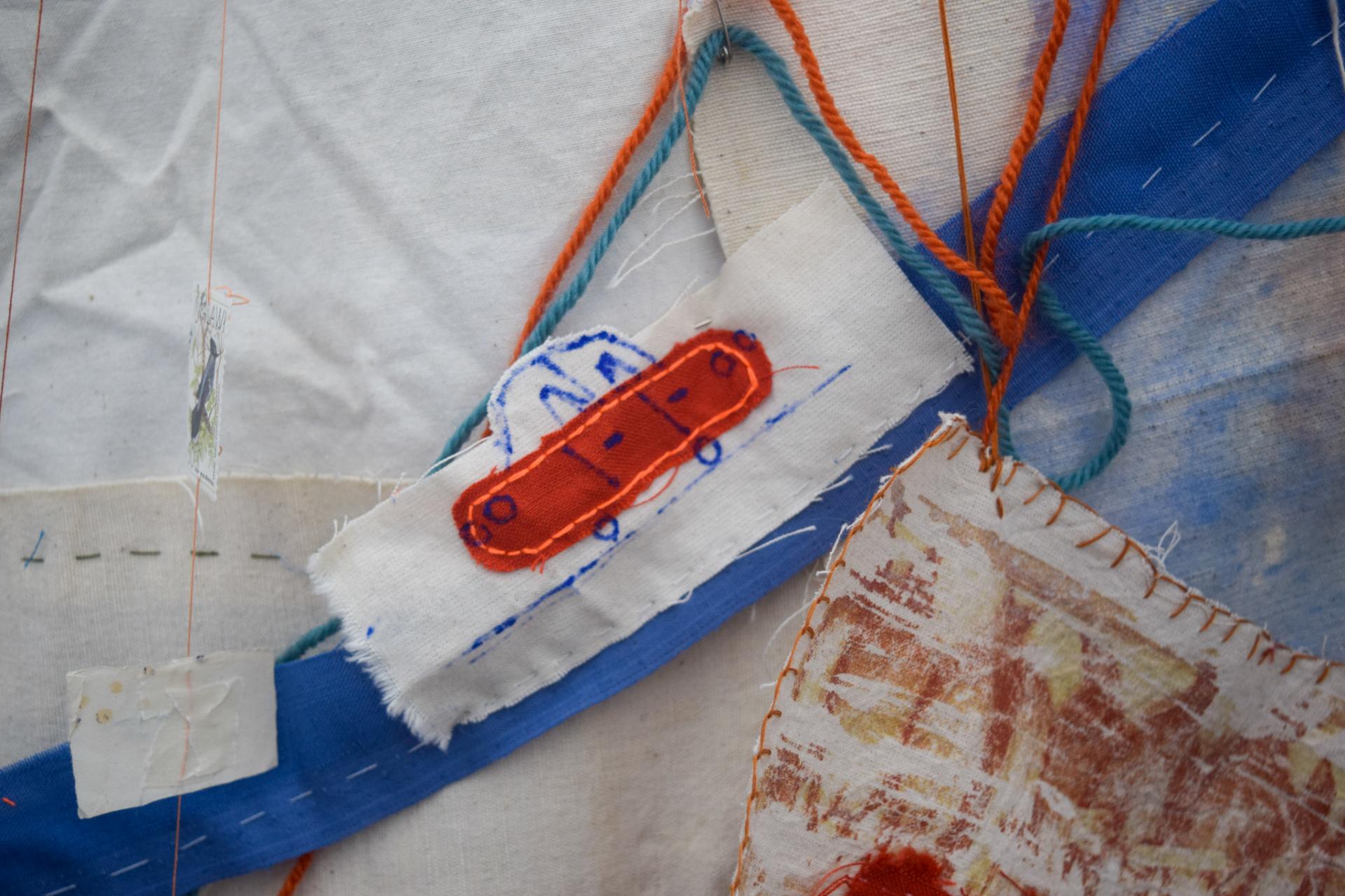 A detail from the piece featuring a small orange fabric car sewn onto a blue road. The blue road is a long strip of fabric that stretches off the image.