The Anthropocene , the geological age in which humans are the prominent force shaping the global environment, forcing humans to rethink their actions. The aesthetic visuals of plastic remind us of the fatal fate of plastic waste, the strong adaptability of plastic can be utilised in contemporary art and design .

One would suggest my work  is almost a macro representation of microorganisms. There is a continuing theme of creature like beings providing  protection, renewal and growth in both my drawings and plastic sculpture work. During the process of making the sculpture, the pain of seeing my gran die as each day went by, seeing her body shutting down , unconsciously, started to appear in my work. The use of red paint, which I never used in my plastic sculpture up to now, representing blood, an inner war , an anger and pain of seeing her suffer. My sculpture may seem of something monster like , but in reality it is now a symbol of protection and warmth, something my gran provided throughout my life,  an ode to my gran, like Louise bourgeois Maman (1999), a monumental steel spider, often depicted as an object of fear, but for the artist it is an ode to her ‘clever, dainty’ mother, ‘spiders are helpful and protective, just like [her] mother’ (Bourgeois,L).

Utilising plastic waste in aesthetic ways to creature sculptures has been the main attempt in my work. Plastic waste is widely  classed as unvaluable, it lacks meaning to us all. One cannot be oblivious to the fact that, plastic waste is accumulating in our waterways and landfills, polluting the environment and as well as our bodies. Although plastic waste to us is of no value, by creating something that in a way connects to my deceased gran, brings a level of sentiment attached to the plastic waste.

The bottles used to form the main structure, are the special drinks, the only thing my gran consumed  for the last year. Using those , I was able to create a strong structure, the drinks that made her strong and kept her going. This has, in some ways altered the subject of my work, but has remained grounded with the ecological issues with plastic pollution. Another meaning has been given to  the sculpture, another importance . More directly linked to myself , to my life. I had planned for the sculpture to be a creature of protection, and remains that way, there is something of sentimental value added to the sculpture now.

There’s an attempt to explore the potentiality of making use of plastic waste, creatively tackling the issue of the mass accumulation of plastic debris in landfills and our waterways. Sculptures and drawings inspired by  plants, microorganisms and  repetition of patterns found in nature. There is a de-familiarisation of plastic, the mass-produced factory-made product no longer looks like its original form, attempting to imitate nature it becomes an organic looking form. 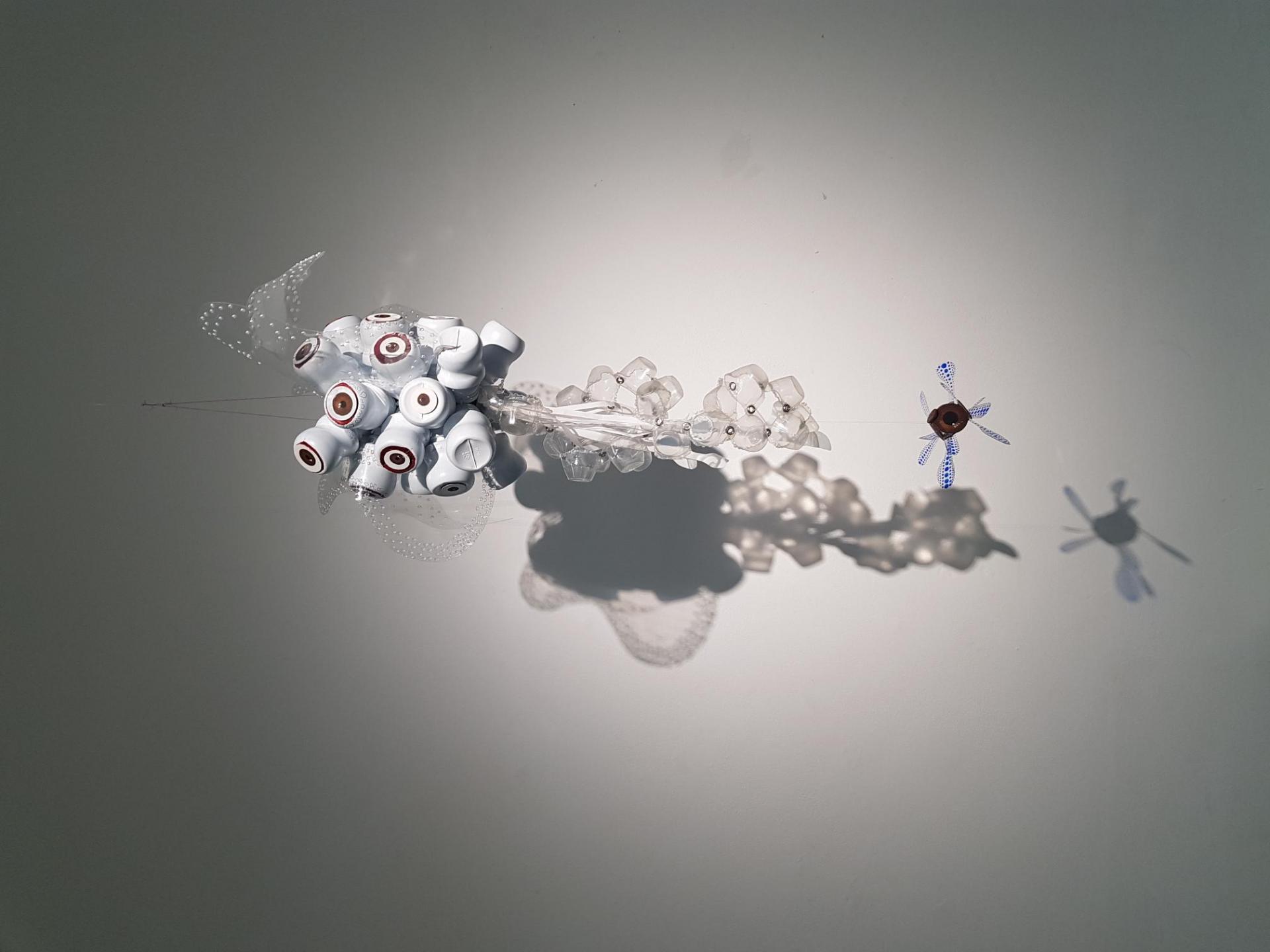 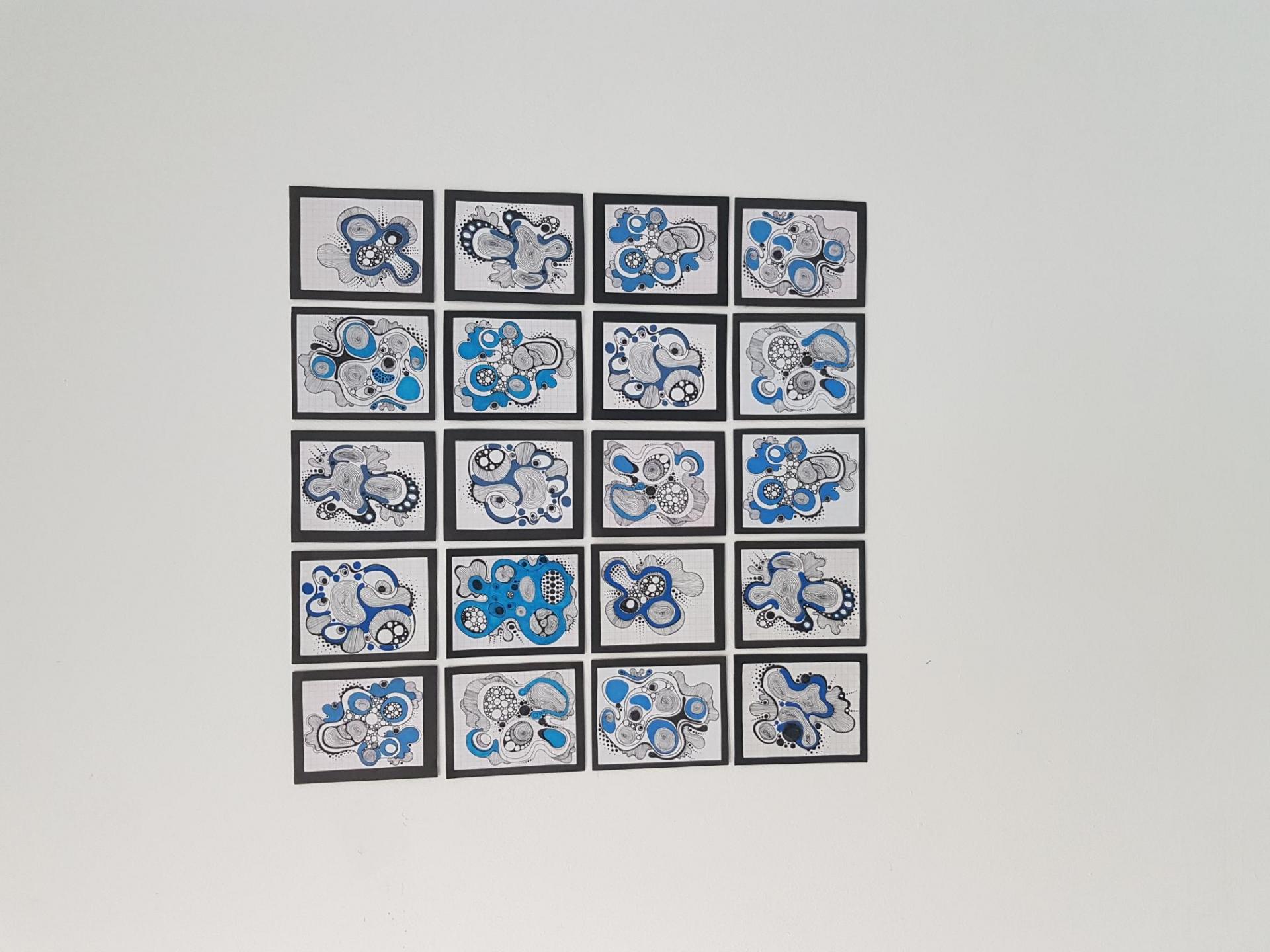 ‘Living’, series of pen drawings on grid paper, 4 x 3 inches. 2022 Series of drawings mimicking living organisms found under the microscope, moving, growing and thriving. Inspired by the many patterns found in nature . 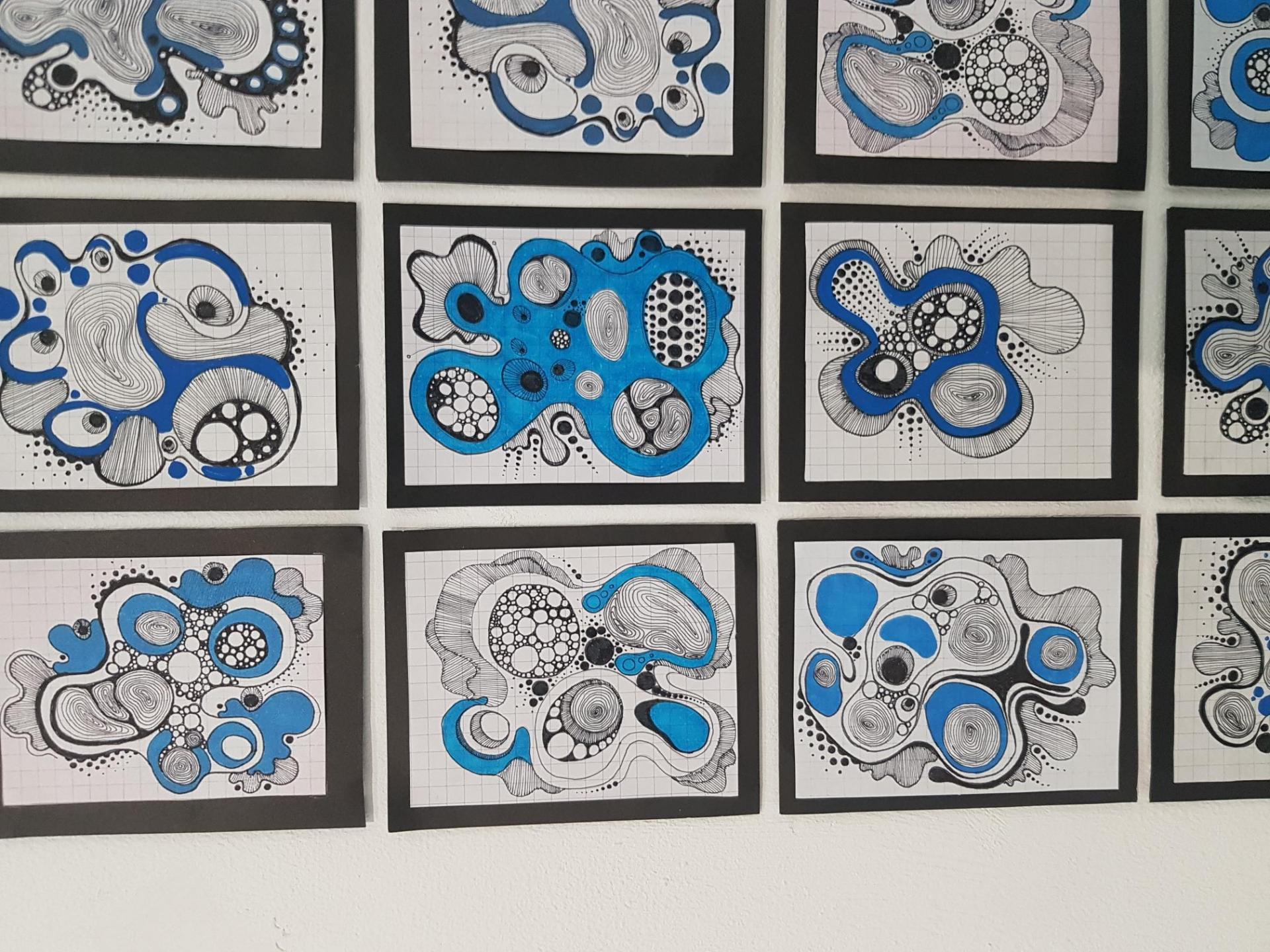 Close up of the 'Living' pen drawing series. 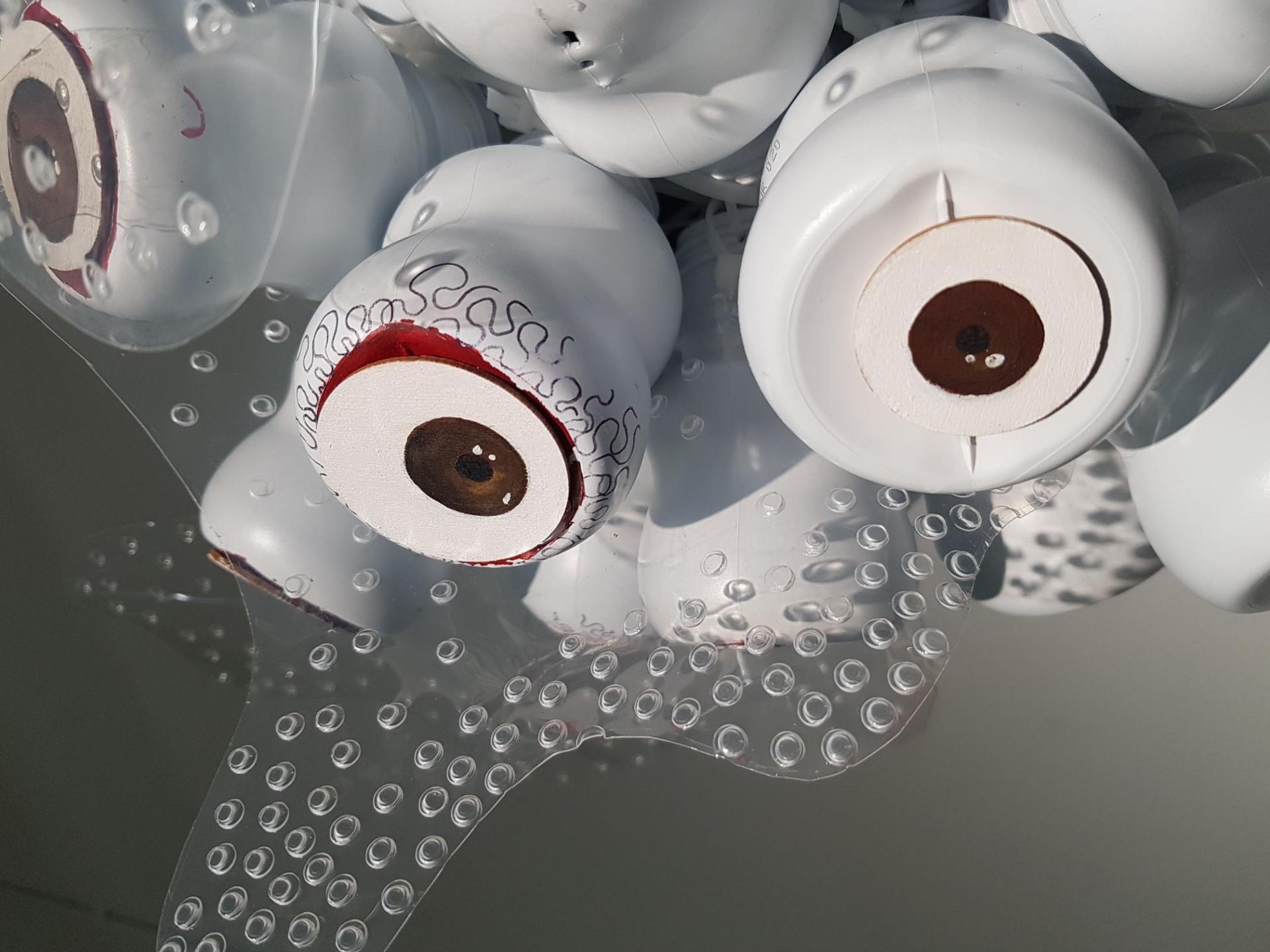 The eyes of 'The Guardian II' plastic sculpture 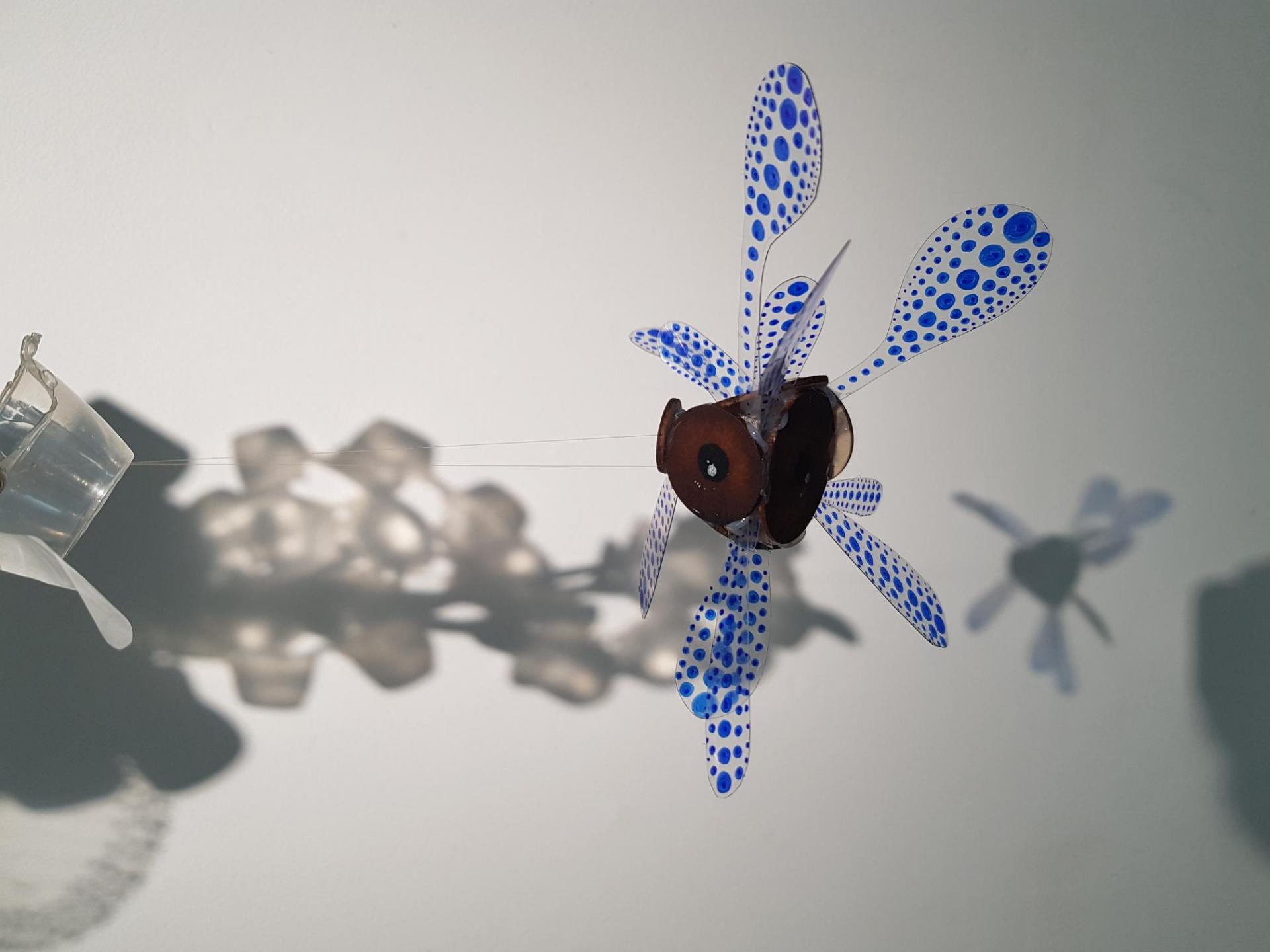 The omniscient being. A close up of an element of the sculpture.